Rent a Peugeot 508 Wagon at Europcar

"The Peugeot 508 is a car developed and produced by French motor manufacturer Peugeot. Based on the concept car ""5 by Peugeot Hybrid 4"", it was officially presented at the Paris International Motor Show in 2010. This car belongs to the intermediate category and has been marketed since early 2011. Replacing both the 407 and the 607, the 508 is also available as an estate version. Once behind the wheel, you're won over by the quality of finish, the choice of materials and the presentation of the whole package. The 508 is now as good as its German competitors ! But that's not all. Other noteworthy qualities are its comfort, good road-holding, smooth and fuel-sparing engine, its capacity in the back and its large boot, especially in the estate version. " 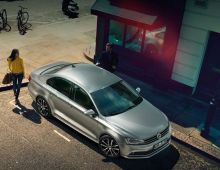